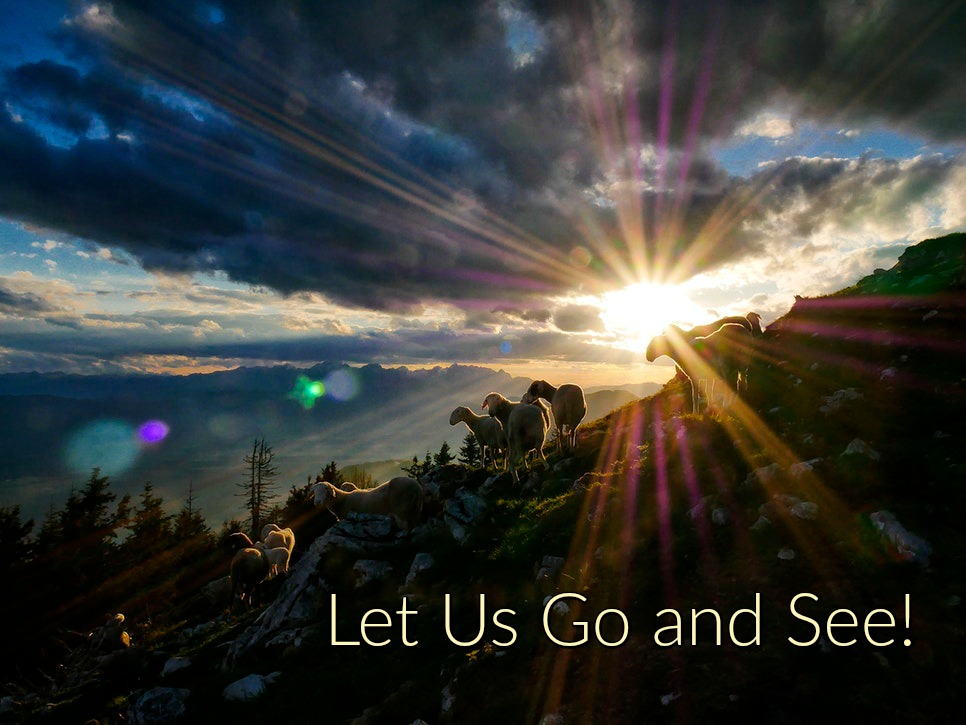 “In that region there were shepherds living in the fields, keeping watch over their flock by night. Then an angel of the Lord stood before them, and the glory of the Lord shone around them, and they were terrified. But the angel said to them, “Do not be afraid; for see—I am bringing you good news of great joy for all the people: to you is born this day in the city of David a Savior, who is the Messiah, the Lord. This will be a sign for you: you will find a child wrapped in bands of cloth and lying in a manger.” And suddenly there was with the angel a multitude of the heavenly host, praising God and saying,

“Glory to God in the highest heaven,
and on earth peace among those whom he favors!”

When the angels had left them and gone into heaven, the shepherds said to one another, “Let us go now to Bethlehem and see this thing that has taken place, which the Lord has made known to us.” So they went with haste and found Mary and Joseph, and the child lying in the manger. When they saw this, they made known what had been told them about this child; and all who heard it were amazed at what the shepherds told them. But Mary treasured all these words and pondered them in her heart. The shepherds returned, glorifying and praising God for all they had heard and seen, as it had been told them.

After eight days had passed, it was time to circumcise the child; and he was called Jesus, the name given by the angel before he was conceived in the womb.” Luke 2:8-21

Let Us Go and See

By Jonathan and Lauren Clinger

Advent is an invitation for us to witness for the kingdom of God.

In the black of night, God’s awesome power shone in the sky as the heavenly hosts invited the shepherds to witness the Good News–the birth of Jesus. The shepherds were among the first witnesses of the gospel, going and seeing the Christ child in a manger according to the instructions of the angel. Once they had, they spread the gospel to anyone who would listen, who marveled at what they had been told.

God invites us in our own lives to come and see the glory of His kingdom. He invites us to see the Good News, Christ the Lord. To come and meet this Jesus through whom God reconciles his creation. In so doing we cannot keep this gospel to ourselves, we cannot help but spread the good news like wildfire. We go forth witnessing to the Kingdom of God, just like those shepherds did so long ago.

Today, the invitation to witness the glory of God still stands, just like it did that night so long ago. Let us go and see, as the shepherds did.