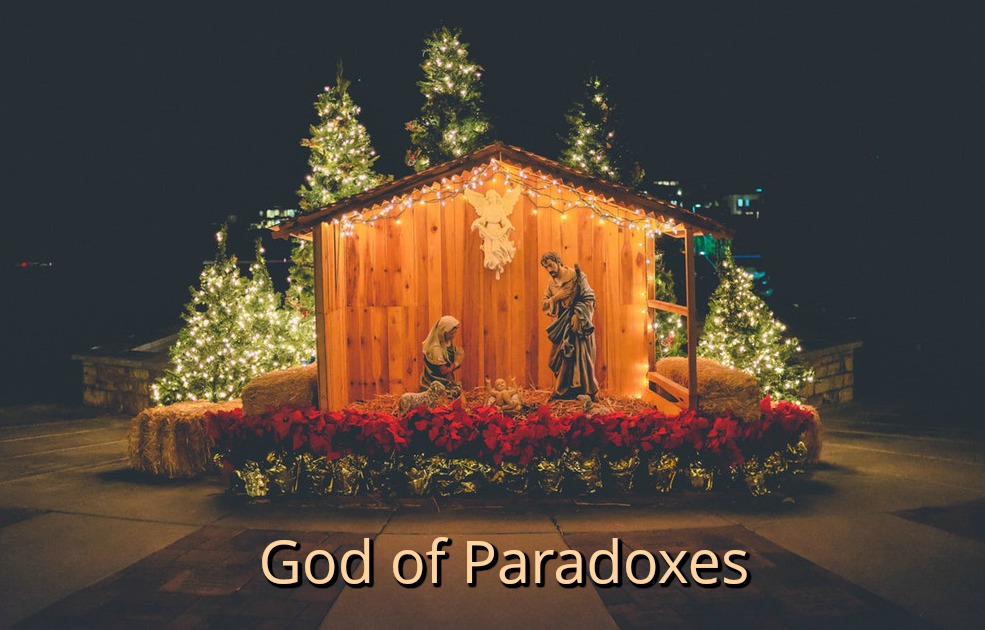 “In those days a decree went out from Emperor Augustus that all the world should be registered. This was the first registration and was taken while Quirinius was governor of Syria. All went to their own towns to be registered. Joseph also went from the town of Nazareth in Galilee to Judea, to the city of David called Bethlehem, because he was descended from the house and family of David. He went to be registered with Mary, to whom he was engaged and who was expecting a child. While they were there, the time came for her to deliver her child. And she gave birth to her firstborn son and wrapped him in bands of cloth, and laid him in a manger, because there was no place for them in the inn.” Luke 2:1-7

God has many names, but one I believe that is often appropriate is “God of Paradoxes.” So many times Jehovah does the opposite of what we might think is the rational or expected choice.

Take, for example, the reading today. Adonai chose to enter his creation in the body of an infant—not an adult, but a helpless infant. Immanuel, who could have chosen birth in a grand palace, is born instead in a primitive place—a crude stable or, as some believe, a cave. The parents of the infant-God live in Nazareth, but prophecy said he would be born in Bethlehem. Although Elohim could have chosen a couple in Bethlehem, he did not. Not coincidentally, a government official called a census, and the couple had to travel to Bethlehem in the final days of Mary’s pregnancy, just in time for her to deliver.

Clearly, the birth of Jesus is a study in paradox. As Ambrose writes in the third century: “He was a baby, a child, so that you may become a complete, mature person. He was wrapped in swaddling clothes, so that you might be freed from the bonds of death. He was in a manger so that you may be on the altar. . . . He had no place in the inn so that you may have in heaven many mansions. He, being rich, became poor for your sakes, that through his poverty you might become rich.”

The God of Paradoxes still lives in the world today—maybe even through you and me.