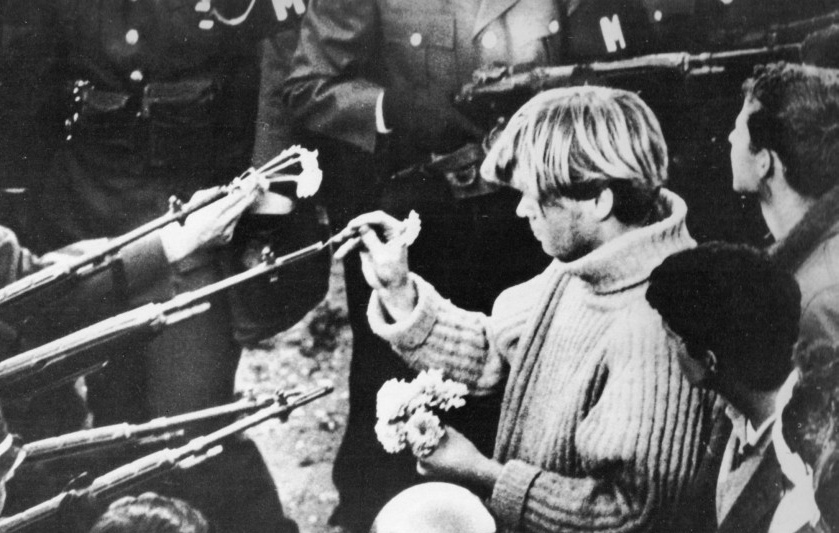 With the public reemergence of racist groups in the United States, the church may think it is our job to return hate with hate. Not according to Jesus. If a given church is not already practicing the opposite of hatred, speaking out against violence merely comes across to non-church types as opportunistic. Moreover, if a church is not clearly at all times choosing mercy over sacrifice we have much bigger issues to address than what to say in the face of evil.

With that said, recent events in Charlottesville, Virginia, along with not so recent events like the Oklahoma City bombing in 1995 and the bombing of the 16th Street Baptist Church in Birmingham, Alabama in 1963 when four little girls died, all tie back to what results when a group of people choose sacrifice over mercy, talking over listening, and yes, hate over love. In no way is this the way of Jesus.

In Jesus’ Sermon on the Mount in Matthew 5-7, Jesus speaks to the higher calling of loving our enemies. It was unpopular when he said it, and it is obviously still unpopular. Jesus begins by alluding to the conventional wisdom that seems common to human practice. “You have heard that it was said to love your neighbor and hate your enemy.” I have a feeling that some people in the audience that day shouted a collectively hearty “Amen!” I picture Jesus pausing a moment for effect. 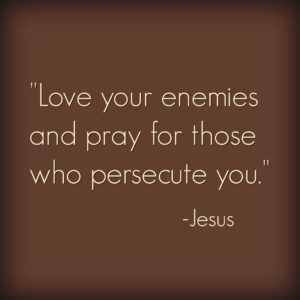 And then… “But I tell you, love your enemies and pray for those who persecute you.”

Abject silence. No “Amens” on that one.

Keep in mind that Jesus said this while his homeland was occupied by Rome. But I do not think Jesus’ statement was aimed at the Romans, or at least not merely at them. Not that simple. Jesus may have been telling his people to love and pray for their own who colluded with the Romans. Their brothers who collected taxes for Rome. Their children who reported unlawful behavior to the powers that be that got them in trouble. Roman sympathizers who wanted nothing more than to guarantee their own security. Men, women, and children who raised salutes as the occupying forces passed by in their perverse parades. Those who shouted in manufactured solidarity, “We have no king but Caesar!”

We must learn how to be united in a world divided.

The church of Jesus has practiced division far more than we have practiced unity. Drive down any given thoroughfare in the United States and you are likely to see all kinds of Christian buildings with differing brand names. What kind of message does this send? It sends a message of division.

Our divisions are a direct result of we as churches spending our time answering questions that the world is not asking. We have divided over our own issues when most people are just trying to figure out whether God is actually there, and if so, does God actually care?

We have gone the way of the world on this one by thinking that we have to create just the right church. We have gone the way of the world by giving in to the Christian advertisements that tell us that we have to find the church that is just right for me. But in so doing, if you manage to find just the right church, then if you stay with that church for more than a few years, they will most likely say something or do something that you will not like, that you will disagree with and think, “Is this the wrong church for me?”

I am the chief of sinners on this one. I have spent my ministry career banging my heart against wall after wall. Only now am I beginning to realize that the church of Jesus needs to be about more than my own preferences, and maybe even more than my locked down interpretations on my favorite issues. 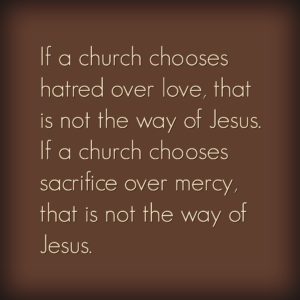 And that is where we are called to engage the world.

If the church of Jesus wants to do something truly great, then perhaps we should start by not claiming to be so great. Humility over relevance. We probably owe the world an apology for allowing ourselves to become so divided in the name of Jesus.

We need to tell the world that we are sorry for those times when we have returned hate for hate.

We need to tell the world that we are sorry for those times when we have practiced law instead of grace.

And then, when the world asks what all of that means, our job will be something more than a display of yet more words. It will be on that day when we can say united, “Here, we may get this wrong at first, but let’s just try this together.”