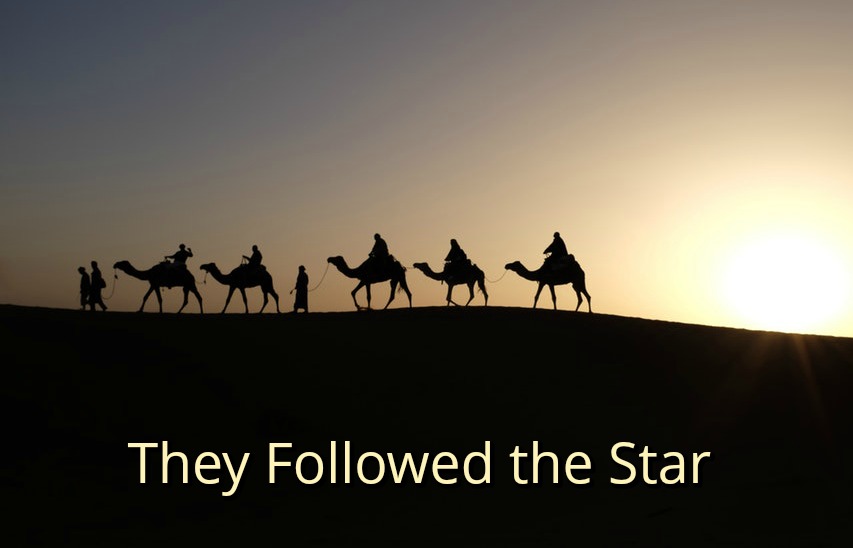 “Then Herod secretly called for the wise men and learned from them the exact time when the star had appeared. Then he sent them to Bethlehem, saying, “Go and search diligently for the child; and when you have found him, bring me word so that I may also go and pay him homage.” When they had heard the king, they set out; and there, ahead of them, went the star that they had seen at its rising, until it stopped over the place where the child was.  When they saw that the star had stopped, they were overwhelmed with joy.  On entering the house, they saw the child with Mary his mother; and they knelt down and paid him homage. Then, opening their treasure chests, they offered him gifts of gold, frankincense, and myrrh. And having been warned in a dream not to return to Herod, they left for their own country by another road.” Matthew 2:7-12

They Followed the Star

“When they saw the star, they rejoiced exceedingly with great joy.”

The Star. Yeah, that Star. It had appeared and a few astrologers knew what it meant. These were not rabbis, trained in the Torah. These were not Pharisees who enforced God’s law.

They followed the star for days, weeks, some would even suggest years. These were Gentiles, pagans who, contrary to God’s law, sought guidance from the celestial bodies. They were sinners by any definition of the word. Yet they understood something that many people of faith could not grasp. They understood Jesus’ deity.

They followed the star from somewhere back east to this place. They met the man in charge and he wined and dined them. He even gave them a place to sleep! And he offered to go and worship the baby king.

They followed the star to this palace. And they rejoiced at seeing the star again. They knew this simple point of light in the sky would lead them to the light of the world. They knew the entire purpose of their lives was about to change.

They followed the star as it led them to their Savior. And they rejoiced.

Let us all rejoice when we see what God is doing in our lives. Let us be wise, like these average, everyday people, and find the one thing that makes it all worthwhile. And let us act as they did, leaping out in faith to find God holding His net.