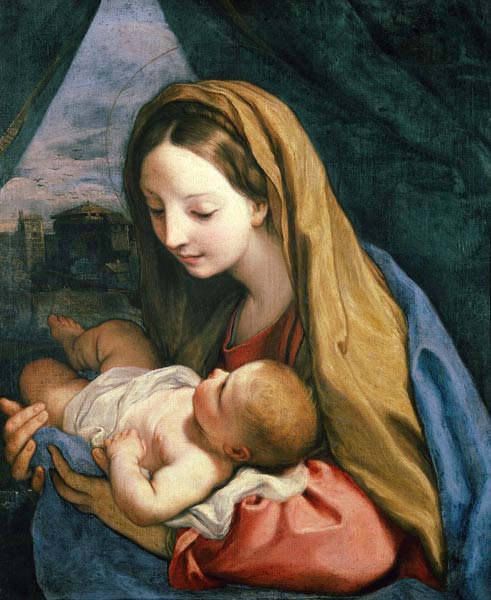 “And the Word became flesh and lived among us, and we have seen his glory, the glory as of a father’s only son,[a] full of grace and truth.  (John testified to him and cried out, “This was he of whom I said, ‘He who comes after me ranks ahead of me because he was before me.’”)  From his fullness we have all received, grace upon grace.  The law indeed was given through Moses; grace and truth came through Jesus Christ.  No one has ever seen God. It is God the only Son, who is close to the Father’s heart, who has made him known.” John 1:14-18

That the Word, logos, God chose to be born a child. Human, and yet divine (as if we have any sense of what that really means). That’s just preposterous… isn’t it?

For me, it’s easier to go with the ethereal (pronounced in a high-brow British accent) Jesus the Divine. Like the wonderful picture William Chatterson Dix paints:

What Child is this, who laid to rest
On Mary’s lap, is sleeping?
Whom angels greet with anthems sweet,
While shepherds watch are keeping?
This, this is Christ, the King,
Whom shepherds guard and angels sing:
Haste, haste to bring Him laud,
The Babe, the Son of Mary!

Angels singing… the announcement of cosmic proportions. I can hear the heavenly chorus swell.

No, no problem there. But God becoming human? No beatific halos for Mary and Jesus. Just a poor boy being born, out in a stranger’s barn, rich with the smells of the animals.  A baby who cried, suckled, and needed his diapers changed?

What if God was one of us?
Just a slob like one of us
Just a stranger on the bus
Tryin’ to make his way home?

The first song fills me with awe.

The second chokes me with feelings of “tryin’ to make my way home.”

And I am so grateful that God chooses to walk with us.