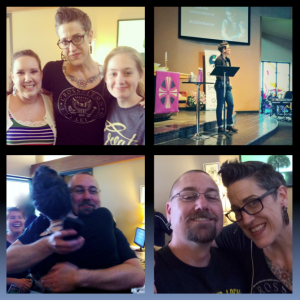 (The audio version of this story is available here at our podcast:

Of if you prefer to read the story, here is the transcript.)

Welcome to “Five Minutes Alone,” the weekly podcast of the Bering Drive Church of Christ. I’m your host, Jeff Christian, preacher at Bering. This is episode 10 of the second season, “Naming the Thin Places.”

Thin places with God don’t happen when we want them to happen. We try to manufacture them with spotlights and smoke machines, but most of the time God shows up in more unexpected places. And for a few of us who went to listen to Nadia Bolz-Weber last Saturday, one of those thin places with God showed up when we least expected. More on that in a moment.

Today, Tuesday, March 25, 2014, is a Christian holiday called the Annunciation of the Lord. It celebrates the day when the angel Gabriel announced to Mary that the savior of the world was soon to come through her. Talk about unexpected!

Add to that the story of the Samaritan Woman* in John 4 that many of us preached this past Sunday. She was in every way “different” than the acceptable proclaimers of her time. She was a woman, divorced, and a non-Jew/non-Gentile reject. And yet she was the first preacher of Jesus. Go figure.

I had already written my sermon on the Samaritan Woman by the time last Saturday rolled around when a number of us from Bering went to hear Nadia Bolz-Weber. If you do not already know her, she is often described as the pastor in Denver who is six feet tall and covered in tattoos.

And it’s not that Nadia reminds me of the Samaritan Woman, but considering the Christian heritage that Nadia and I share in traditional Churches of Christ, let’s just say that she doesn’t fit the mold of what a preacher looks like.

But to me as one Church of Christ preacher who at least used to fit the mold of what you are “supposed to look like,” I thought it was important to say something to Nadia Bolz-Weber publicly.

Now, I didn’t ask for anyone’s permission; I just felt compelled to do this. But in an act of bold defiance, I spoke on behalf of the entirety of the Churches of Christ.

So here’s how I want to set up the rest of the story:

When Mary received the news from Gabriel that Jesus was on the way, her response was basically to say, “Behold, I am the servant of the Lord.”

When the Samaritan Woman in all of her brokenness began to proclaim the salvation of Jesus, she was the first preacher who was certain that the story was bigger than her, and in many ways also said, “Behold, I am the servant of the Lord.”

And as we sat on Saturday and listened to Nadia Bolz-Weber tell her story that was so much bigger than her story, every turn, every self-disclosure, and every joy was seasoned with those who came before her who taught her to say, “Behold, I am the servant of the Lord.”

And that made me sad. I was sad because this six-foot-tall, tattooed, female preacher was not allowed a voice in the tradition we both share. So during a question and answer period, surrounded by about twenty of my fellow Church-of-Christers and a whole lot of Lutherans, I raised my hand.

At first, she called on someone else, and I rehearsed in my mind what I felt compelled to say.

Finally, she pointed at me, looked me in the eye, and said, “You, in the glasses.”

“I am a preacher…” I began, at which point everyone laughed because Nadia had just spent a few minutes commenting on the odd little world we preachers live in.

I continued, “… at the Bering Drive Church of Christ.” More laughter, followed by Nadia’s bright eyes making a few comments about her growing up in Churches of Christ to make the connection.

And that’s when the thin place hit her, me, and many others in the room. I took a deep breath, and said, “I just want to say on behalf of all Churches of Christ that I am sorry you were not allowed a voice in our tradition.”

Total silence. Nadia’s eyes filled with tears, as did many of us who knew why she reacted that way. People started clapping, and even cheering. And with breaking voice she said, “Thank you. No one has ever said that to me. Let’s end the session there.”

And that’s when Twitter lit up. Apparently someone running the show that day at the Lutheran Church put up a blurb on Twitter—or I think the proper term is “Tweeted”—that someone from the Church of Christ just apologized to Nadia. The response of people asking to hear more of the story is what led to this podcast, so there you go.

But there’s a little more to the story. After lunch, I talked to Nadia for a minute, which was great. But what meant even more to me personally was getting to sit next to my 14-year-old daughter during the second session while Nadia further described God, ministry, church, and redemption.

And in some ways at that moment, we all became the Samaritan Woman proclaiming the redemption through Jesus that none of us could possibly grasp as a result of our credentials. Instead, we all join the tradition of unlikely preachers who could do little better than to stand before God with open hearts. A few of us even try to resist God at times, God’s little misfit children that keep coming back with stubborn gratitude. But because of an undeniable salvation that God keeps offering to cracked pots like me and Nadia and probably you, we say, even with a little trepidation, “Behold, I am the servant of the Lord.”

Go to beringfamily.org for more information on our church, and come see us this Sunday if you are in Houston. Follow us on Twitter @BeringDrive and like us on facebook at facebook.com/beringfamily.org. Let us go tell the story with our life and with our words.

* The sermon about the Samaritan Woman can be found at the Bering website at this link: https://beringfamily.org/multimedia-archive/the-first-preacher/